Lono and I woke up and went right to work on making french press coffee and then headed out to find what new adventures were in store, as well as peace and serenity. We took the back way through Haiku to head slowly to the remote and lush horse town of Hana.  Lono must not have slept well the night before, as he gave me a good hard belly laugh when he slept with his head out the window.  I had to wonder if people thought he was even alive, as he was totally passed out. Our first stop was the often photographed from afar, but rarely visited Honomanu Bay.  All alone in the mornings sunshine, Lono played in the water while I enjoyed strolling along the ocean side with my thoughts and then later, my camera.  We shared a quick meal and carried on, already feeling like a billion bucks.                                                                    ﻿

﻿A stop we always make every trip to Hana is in Ka'enae.  There is a secret coconut spot which also offers ridiculous views of the rich coastline. I saw a playful dragonfly and Lono husked a coconut in less than a minute... His new record!  We cruised slow to Hana Bay for an incredible swim in the ocean with my mutt, who was a ham enough to draw a small crowd of children.  They loved giving Lono commands to fetch his ball in the water.  We stopped at Koki beach where the surf was up, and made our way slowly to our campsite for the night in Kipahulu by the 7 sacred pools.  I chose the corner spot, on the ocean, next to the trails.
We fetched firewood on a mini hike, (Lono loves dragging trees and sticks), and made a pile by the grill pit for later. 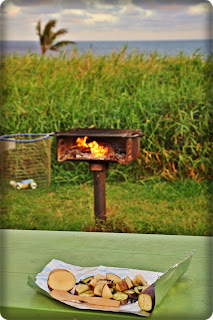 I painted a bit and then chopped up a dinner of eggplant, potato, olive oil, sea salt, pepper, and rosemary and basil from our garden, and made a hobo pack in aluminum foil.  Some "right out of college" guys showed up beside me later with their charcoal and lots of lighter fluid.  I seriously had an inner giggle when I saw them struggle to keep the coals lit.  They drunkenly stopped by my site later to tell me how dumb I made them feel by blowing on my sticks and getting my fire going faster than theirs. I told em', "Didn't mean to hurt your egos city boys!" After they inquired a little more about me and "What is a girl like me doin' alone out here?", I gave them the schpeel on my birthday gift to self, along with informing them about my protective dog who's trained in German, and of course, my husband. Never was I harsh... I was just making certain my "off limits bubble" was inflated.
A peaceful night by the fire, some guitar, some great food, and being by the salty rhythmic ocean with my furry monkey at my feet... Life doesn't get much better than that...
﻿﻿﻿ ﻿﻿﻿