Heavenly Kauai... The airplane ride over was a breeze and Lono was a saint.  He slept at our feet the entire way as we got thrown our P.O.G. juice boxes and landed within an hour.  Then the bus ride to the rental car and we were set to go to our jungle haven for the week. We stayed in a tree house on a farm I use to volunteer at when I was WWOOFing, (volunteer organic farming), around Hawaii and Costa Rica.  I was there previously for 6 months with no electricity and lived in a tent by a waterfall pool.  Though lacking most luxuries that population majority take for granted, this 25 acre farm was my FAVORITE of the 5 WWOOF farms, although the 12 days straight of rain and flooding we had back then made you near beg for a dry place to rest by a fire and some hot cocoa.  I'm almost certain my fingers and toes were permanently pruned for 2 days past rain's end.

Just driving in brought back a flash of memories.  I remember painting the giant beams "Kermit the Frog" green four years ago when the tree house was merely a thought and not even a board had been placed, and laying tile in the owners home before it had been completed, to now get to see it fully set up with appliances and well lived in.  Seeing the farm and property projects that had grown was enough to make this garden girl tear up with pride for the sweat and long hours I'd contributed 4 years ago. 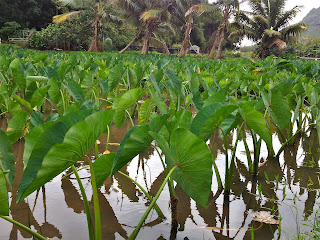 The numerous taro ponds, (lo'is), Fijian coconut trees, bread fruit trees, avocado trees, the waterfall pool, fresh spring water, tilapia tanks, food bearing gardens, Muscovy ducks, wild chickens, "Epo" the donkey, and the sheep, many of them still the same, and some I had privately named for their lack of names before, like the big head man "Ulysses", were all a giant reminder of where I want to be... farming... sustainably.  Nothing had changed, yet everything had... A never ending cycle of growing food and property maintenance.  Just the smell makes me want to get my nails filthy dirty, and then clean up just to cook a bomb, farm fresh dinner.
The owner, Don, an Aquatic Biologist for the Hawaii Division of Aquatic Resources, was ever so gracious, as always, and holds an absolute plethora of knowledge and brilliance about agriculture and sustainability that we just absorbed the information he freely offered over campfires and kitchen meals.  At the point when we did leave, I had to write him a letter because he was pacing around the farm on his phone, which was actually him being "on air" with a radio show about something to do with bettering the land or the ocean I'm sure.  A very caring and environmentally brilliant man. 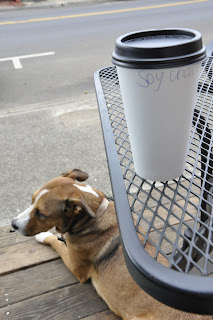 That week, we spent our time sipping coffee outside of cafe's in Kapa'a, stand up paddle boarding with Lono, (all three of us on one board), down a sweet river with changing currents that took you along miles of wildlife reserve one way and out into the ocean the other way.  We did some sight-seeing up to the canyon and some surf inspecting along the beaches, Lono at our side smiling the whole time.  Our diet consisted of everything from taro fries, farm fresh papayas, health food store wraps and tabouleh, authentic fish tacos, to the amazing and some what famous, Puka Dogs in Poipu, (which are truly worth the three trips we made just for them alone).

One morning we spent working the taro field, weeding and racking to get our farm fix in, when Don came out unexpectedly with his french press, two mugs, and soy milk in hand insisting that we drink our morning joe even though our hands were covered thickly with the lo'i mud and we were standing up past our ankles in the mucky ponds.  He then made us a delicious breakfast of eggs and taro in his friendship and appreciation.  We bathed off later in the secluded waterfall pool and hacked open a Fijian coconut with a machete for a refreshing drink high in electrolytes, (Gatorade's a joke compared to a fresh Fijian coconut).  During our nights there, we would sit out on the tree house lanai, (this is a 350 sq. ft. tree house you see), and share a bottle of wine in the candlelight over conversation and the chirping of toads.  Feeling as though there is no one for miles, I don't believe there is anything quite so rugged and romantic at the same time.

Everything about Kauai feels like "home" to me.  The laid back, country, farmland, food producing, hiking and water activity heaven-ness that it possesses is my real life Avatar.  The rest of my two month journey was waiting for me, and with only two days to pack, leave, and spend time with Jun before I was on a jet plane to the mainland, we were on a magical sunset flight back to Maui with Lono Boy.  Had the journey not just begun, we could have stayed forever...

P.S. Your comments make me HAPPY!
P.S.S. All of these pictures were taken with my iPhone.  Gotta love technology "sometimes"!