If you don't feel like reading a novel... click on one image and then you can scroll through them all blown up.  It tells a story all by itself... mainly about food and alcohol. :)

Jun dropped us off at the airport...  kombucha in hand to keep my nerves at rest about flying and about leaving my Maui home, Jun, and for my fear of flying.  Lono was confused that Jun wasn't with us, and starred at him the whole way until we made our way to the security gate.  That was it... Adventure #2 was on.  Lono again slept at my feet the entire flight.  Thank heavens for the designated gravel pet pee places at the airport, as we arrived around 5am, and our friend and host, John, would be there closer to 6:30am.

You all might think I'm crazy, but I met my buddy John on a wine website some years ago. www.snooth.com to be exact.  He became my wine mentor and friend and was kind enough to answer the hundreds of questions I had about pairing, wine regions, grapes, etc.  He works at a winery and also partakes in his own wine business venture.  He flew to Maui for a wedding recently, and we decided to meet in person, and finally got to share our first bottle of wine at that time, (brought by him from Cali).  We agreed that the next time I found myself in California, I would have to come check out his neck of the woods.  This trip was me keeping that promise.


The drive from San Francisco to Palo Alto, where John lives, was a lot of highway and structures.  I already looked forward to seeing more scenery, water, food, and wine.  Once arriving to settle my things, John opened his fridge to begin cooking breakfast, (which he included pineapple in to give me a taste of home), and I saw he had kindly stocked some Maui Brewing Company beers to boot!  I wasn't feeling so far from Maui after all.  We teamed up on breakfast and I got my first taste of a really amazing cheese, (something similar to a Havarti).  Lono and "Uncle" John met in Maui, so they already knew each other and hung out together like peas and carrots.  Lono took advantage of John's love for him by sneakily sleeping on his couch when we were all in bed and soaking up the belly rubs.

John did have to work some days, so those days Lono and I walked and walked and walked around the quiet neighborhood in Palo Alto, checking out coffee shops and admiring the diversity of flowers I'd never seen before, (Lono peed on them more than admired them).  On John's days off, he took us many places.  My most fond memories were a drive around a mountain, through a giant forest of redwoods and other pines, and finding that the country, (and country type people), existed very close by.  Alice's, a cabin in the middle of nowhere with moss covering its rooftop, had been turned into a restaurant and was an amazing atmosphere that had great food.  I went for the "redneck benedict".  Applewood smoked bacon on top is where it's at. The smell outside in the crisp air was so fresh.  I loved that place and decided I could live there someday if I ever had to leave Hawaii.

That day we also drove to along the coastal highway, a trip I'd done on a road trip previously from San Fran to Washington state, but we went further south.  The coast is always beautiful and the switch from mountain pine to sweet salty ocean was quick and comforting.  No one in the water had me desperate to go for a surf.  I realized I'd freeze my tropical buns off, but having your own wave is such a beautiful thing.  I started inquiring about board and wet suit rental shops, but decided that Maui and it's glorious ocean would be waiting for me.

Other highlights were our outings for dinner.  One was The Counter, the ultimate burger joint with a checklist sheet of every option you could imagine on a burger.  Every month they have a special burger... I was sad I missed out on the previous month's bison burger, but went with the salmon burger special and was very pleased.  A nice, rich, dark beer and some sweet potato fries on the side= Happy happy me.  On one of John's lunch breaks, we went out for the Vietnamese soup known as Pho. In this tiny little strip mall stands a restaurant PACKED out the door with people anxiously awaiting a table to grind on this obviously worth while lunch.  My first time, and boy did I love it!  Maybe it was just that place that was the bomb for pho, but it was perfect.  I added lots of basil, sprouts, and hot chilies to mine.

Another food MUST for me was to try my very first In and Out burger.  The night before we went there, I studied the menu hard over a Maui Brew La Perouse White.  After all the rants and raves and almost crack-like obsession of my friends from California, (they literally have flown each other burgers to Maui), I had my doubts that a fast food joint could actually live up to it's reputation.  Let me tell you, Double Double, Animal Style, with hot chili peppers on it was enough to make my mouth river dance.  My new favorite fast food chain, and the employees were so stinkin' nice.  Like happy, robotic, Mary Poppins with cute little hats.  As for food when we went to Sonoma, we picnicked with long time friends of John's and their little munchkin, (AKA: baby).  First we stopped to taste test at a fine meat and cheeses shop that had more cheeses that I hadn't heard of than those I had.  We bought a picnic's worth of our favorites and then drove to a middle of nowhere winery to buy a couple bottles and break out the bounty of deliciousness right there at a picnic table along side miles of vines.  I've never had cheese better than that.  Lono enjoyed being thrown some picnic lovin' his way too.

I'd been to Sonoma before, but John showed me different places around the area, including Loxton Cellars, the winery he works for.  I got my dear expecting friends, John and Elise, (whom are part of Adventure #3), a bottle of red for after Elise is done breastfeeding and can enjoy her long awaited glass.  The owner was sweet enough to sign it for them.  At the Lancaster winery, we got VIP access to a cellar, (which was actually more of an earth cave), due to John's frequent flyer type membership and just strolled around by ourselves through the wine barrels and fancy furnishings.  Later, we had beers at some place that was a famous pub because of Jack London with one of John's fellow co-workers, and then went to eat with ANOTHER bottle of wine at the very classy and delicious, Fig Cafe.  How I made the room for all this food and beverage, I'll never know... Wait, I lied... I'm a Carroll original; that means spare tanks for consumption.  ;) 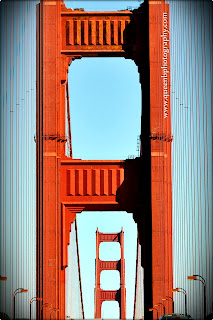 And then, of course, we spent a day exploring San Fran and the amazing little coastal towns that surround it.  Chilly weather, but so worth the exploration.  I could never live IN San Fran, but I thoroughly enjoyed being 30 minutes outside of it.

The day Lono and I actually departed, we left early, just like we'd came and took a train at sunrise to head south to San Diego to visit dear friends and explore some more.  Thank you John for being an EXCELLENT tour guide and friend.  Lono and I had a blast!

In summary, we ate, we drank, we explored... San Fran was a complete success.  And if you're still reading... then you're amazing... this was a REALLY long blog.  Now give your brain a rest and please exercise your eyes some more by enjoying the pictures. :) 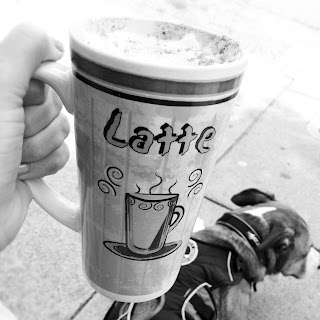 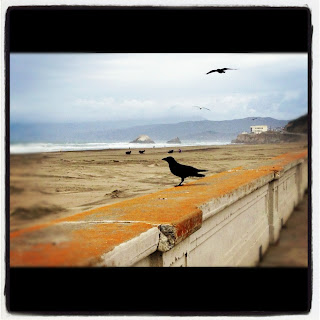 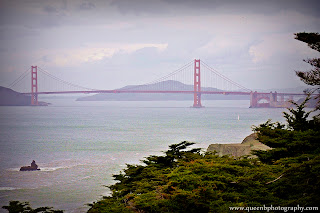 Love and Aloha,
Danielle
Posted by The Life of Sea Glass at 5:52 PM