Adventure 11: My Very First YouTube Posts Ever- Stand Up Paddling and Paragliding Pregnant

I've used my GoPro Hero now for only three things since I've had it... First I recorded all of my tattoo sessions in hopes to some day do a fast forwarded version of the work, (although four sessions at 4-5 hours each left me missing bits of the ends of each one and my sleeve wont actually be "complete" until Reise arrives and I can finish it up).

Then I used it when we went paragliding off Haleakala in June 2012.  I was actually pregnant at the time, but we didn't know it yet, (though we had been trying).  Reise was just a sesame seed still and that just happened to be the same day Jun proposed, (right before we launched as a matter of fact).  Talk about an exciting day/week!


So I've used the GoPro little and it shows... You may initially think you're watching part of the Blair Witch Project...  But we decided to dust off the ole' GoPro this week and put on the surf mounts we got many months ago in Kauai and give it a whirl on our stand up paddle board.  Jun gets some surf, our friend Tim gives stand up paddling a try, (he is Mr. Martial Arts Man and has incredible balance, so you will see it is MUCH harder than it looks, especially in the wobbly ocean), and I'm just cruising along in my last weeks of pregnancy.  Soon enough I'll be surfing it too and will post those videos... and maybe in a few years, so will Reise!  :)

Now if you can promise to get past my morning hair and dumb concentrating "Carroll" face, please feel free to watch it and let me know what you think!  :)

Let me know you stopped by!

Adventure 10: Maternity Photo-shoot and A Few of My Favorite Things! 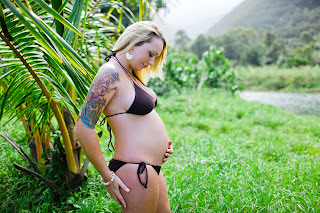 Oh yes... I am becoming prego-normous... Or at least that is how I feel.  Still childishly unstoppable in my need for daily activity, but my belly, (and my appetite), have grown.  I crave brie cheese with torta bread, greek yogurt with fruit, kettle cooked tater chips, fruitsnack gummies, and homemade popsicles, (which has become a fun way for me to get creative with my vitamix and make AWESOME recipes for... like my most recents; chocolatey nutella pops, creamy peach pops, and the exotic ginger lemon green tea pops... all GREAT and super refreshing). 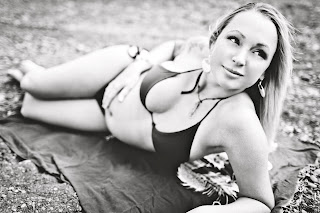 I've had some pregnancy failures and successes.  One success is that I spent $30 whole dollars on maternity clothes which weren't actually maternity clothes at all, but 3 pairs of those groovy stretchy gaucho pants I managed to pick up on sale at Wally World and I can still wear as jammies once Reise arrives.  A failure is that they only had two colors so I'm like Mr. Rogers and I'm sure some have questioned how often I change my clothes.  Thankfully bikinis suffice as an outfit here too! 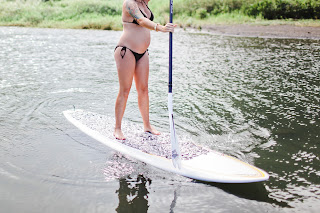 I've also managed to stay successful in remaining active; the usual me:  stand up paddling every beautiful morning, gardening, cooking, cleaning, working for the vet clinic in my PJ's, walking the dogs, and just this past week Jun and I decided it was time to put an end to (me) doing P90x as the belly has officially gotten uncomfortably in the way of squats, push ups, jumping jacks, etc, etc.  BUT I wont try to kid you... I FEEL PREGNANT now; shortness of breath when going up hills, hip discomfort while sleeping, not to mention the swift kicks to the ribs that catch me off guard and make me wince. 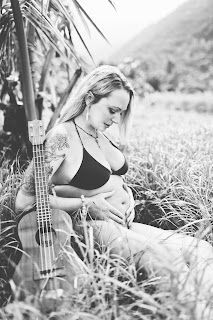 There's the weird dreams too... like last night, (all in one night), I dreamt that I was dating Laird Hamilton, (I did tell Jun about this dream by the way), and that he wanted to kill Robby Naish and I was trying to stop him by trying to find him on some new sports equipment he developed using a paddle on land, but it was too late and he blew Robby and his wife up with a dollar bill... then Robby Naish's security guards shot me and Lono too.  Right after that I dreamt I was at the hospital with my entire family, (like 20+ people), and we had all been there 3 days waiting for me to go into labor and I was in the middle of a lemon eating contest when it finally happened.  What the heck is a lemon eating contest anyways???!!! 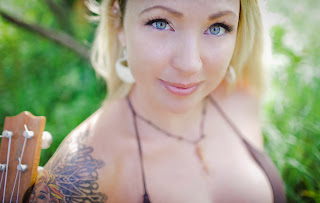 Another failure is definitely my shear fear of labor.  I have never actually spent any amount of time in a hospital for an injury... just some heart tests before which was cake.  To think of not only spending a couple days there, but also the pain of pushing out a baby is absolutely the most terrifying thing I can think of right now.  And I know that I'm more than just a handful to a concerned husband/father.  Many days/hours Jun has researched EVERYTHING to do with pregnancy and birth and has reasoned with me on numerous occasions on why I should wait to go on a particularly long hike (19 miles), or surf, or drive places out of reception.  I feel for him and have told him on numerous occasions that I appreciate him taking care of "us" and that he would have made a much better incubator than me. 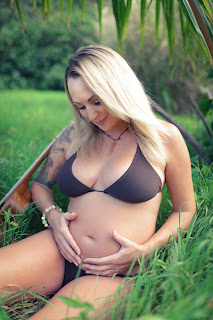 Enough silly rambling... These are last weeks pictures with me at 33 weeks preggers at Honomanu Bay done by Cadencia Photography here on Maui.  The small world story of these images is that it started out as just a link my dear friend Elise sent me via Facebook of a photographer giving away free maternity shoots.  The good news is a week later, there we were, giving it a whirl.  The bad news is, half or more of the images were lost from her camera... (All the ones of me in clothes... go figure).  Should those find their way back, I added sentimental props to them that I'm VERY EXCITED to share... My fingers are crossed the world of technology will be in our favor! 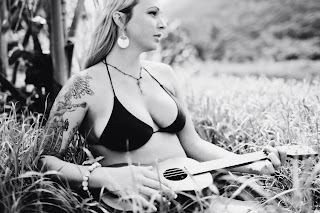 If you stopped by, please enlighten me on which shot is your favorite... I'm excited to know!
I can't believe that she could arrive in just a months time!!!

The pictures below are just a few of my favorite things these days...

Posted by The Life of Sea Glass at 4:29 PM 5 comments: Links to this post