It's true, the other day I came to the realization that since my last post, I've been P-ing all the time.  Not just literally, (which couldn't be closer to the truth though at 36 weeks preggo with a 6+ lb. baby pushing on my bladder), but it seems also that everything I've been up to starts with a P these days. 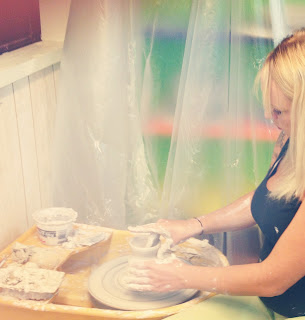 Jun and I saw a flyer hanging at Hasegawa's Store a couple months back that said the Hana Arts Center was having their first pottery workshop.  Those interested could email Paula and she would respond with dates, times, tuition, etc.   I have a very extensive vision board, and smack dab in the middle of it is a picture of clay laden hands throwing a vase.  This was my opportunity to pull a tack out of that board, (one of the MOST gratifying feelings knowing you've accomplished a bucket list goal), and put my own two hands in the glorious muck to make something magical and even more special, to make a memory with the man I love.  I thought all hope was lost for awhile as the baby's due date grew nearer, but luckily we got in just in time to commit to half of the eight classes.  With two down and two more to go, there's a few things I've learned so far:

1). Pottery is not something that can be taught... It has to be felt.  I was expecting instructions, tutoring, and some sort of magical guidance that would teach me exactly what to do... but instead I got handed a block of clay and sat at a wheel, then was shown what "centering" was and cut loose.

2). It's MUCH harder than it looks on youtube videos.  Watching this guy makes me want to drown my sorrows in ice cream and revert back to playing with Play-Doh: Hsin-Chuen Lin's YouTube Channel

3). I'm the only beginner in class making ramekins my new best friend.  I always have had complications trying to find a dish for the soy sauce mixes we make after we pick opihis anyways. ;)

4). Jun's two semesters of ceramics in college stuck with him and he ROCKS the pants off the pottery wheel.  This is not a girl's sport and the two guys in the class are indeed the best.

5). It's EXTREMELY meditative.  I could get lost in throwing clay for hours and hours...


I don't know what came over me, but I think maybe it was a few days of windy weather that made the ants crawl up my pants because the ocean and beaches were not ideal conditions to play.  So with those ants in my pants, I cleaned, I worked, I cooked, and then I sat there and stared at my paddle longing to go out on the ocean.  Then I walked out onto the porch and saw the giant trash bag I'd been neglecting tossing out for days because it contained paints that may have spoiled, (the fumes would nearly knock me over when I'd rummage through the hall closet).  So, in my last effort to go through them and use what was salvageable, I combined the paint and the paddle and spent hours in our front yard bikini-ing it up on a towel with a jar of homemade lemonade, (made with agave and local lemons), and I'd always end up with paint somehow smeared on my face, hands, legs, and even belly.

Here is the result and I'll be the first to admit I'm no Leonardo Da Vinci, but I really enjoyed meditating and dreaming of waves vicariously through paint... (I would have said Picasso and not Da Vinci, but I think Picasso's work was pretty horrid and I like my paddle better... no offense art lovers). 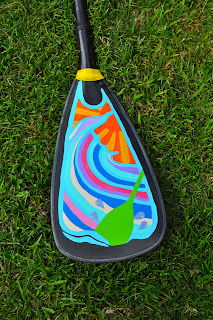 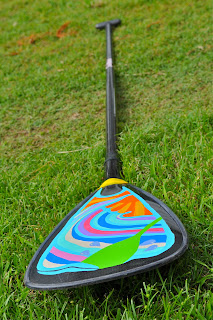 While I'm painting or gardening, I give Lono a coconut off our palm tree and give him an "attack" command.  He freaks out and starts SHREDDING it with this teeth and paws and throws it all over the place.  It's a fun sight to see and he manages to husk our coconuts for us in minutes.  Koa doesn't have a clue as to what to do with a coconut, so he just tries to help Lono out by chewing on the pieces of husk thrown his way.  I love having these crazy guys hanging out with me while I play.

With Reise being SO CLOSE to being here, I've been panically planting.  I figure I may not have the time or energy once she arrives, so I've put in two gardens, one out front by the main entrance, and one in the back under a GIANT fig tree.  Something about a shovel and dirty fingernails gives me instant gratification, not too mention picking the deliciousness as needed from the garden.  I also feel that one of my greatest loves of living in Hawaii, (which are many), is that I can garden year round.  So far I have 3 types of basils, oregano, 3 lettuce varieties (including my favorite, arugula), tomatoes, lilikoi vines, dill, different squashes, rosemary, mint, cilantro, parsley, green onions, jalapeños, and sage... a lot of which I started from seed.  I wish I had taken a "before before" picture of the garden under the fig tree, but I didn't think of it until I was near done clearing it.  Here is what I've been up to for awhile: 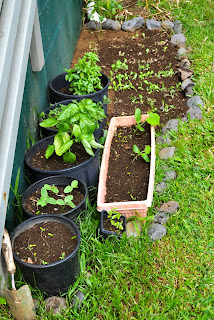 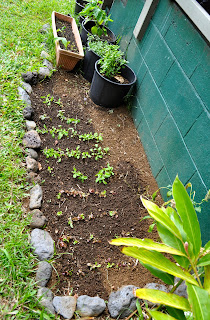 Now which P was your favorite?
I hope everyone had a happy and safe SuperBowl Sunday!