I'm in no way shape or form racist.  I'm married to a Japanese man and my friends come in all sizes, shapes, and colors.  I live in Hawaii where I have experienced being discriminated against for my color more times than I can count on two hands.  I've been called a "Haole" while being ran off the road, I've been cut off of waves by local women plenty of times, them obviously wanting me to say something so they can lay into me about how I should "go back to the mainland".  Before I say what I'm about to say next, I just wanted to be clear that I know what it's like to be discriminated against for my color.  I don't harp on this and I'm not asking for a white history month, I'm not asking for someone to create a caucasian scholarship, I'm not asking for politicians to join a "white lives matter" movement as part of their political campaign.  I'm asking that we stop separating ourselves by color, by uniform, by nationality.

If one cop does something wrong, then all police must be bad, right?  If one black person is a criminal, all black people must be criminals, right?  NO.  The hate circle has gotten out of control.  We've been given the opportunity to be free of this hatred, discrimination and exploitation, and yet we continue to victimize ourselves.  We continue to be drawn into the media and join up in armies against uniforms and armies against color.

Please stop with the hate.  Please stop adding to the media mongrel that's turning us all against each other.  Stop protesting and instead make a change within yourself to recognize that ALL LIVES MATTER. 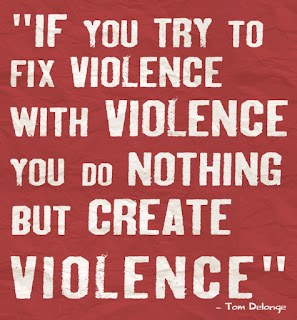